The 3D pose estimation from a single image is a challenging problem due to depth ambiguity. One type of the previous methods lifts 2D joints, obtained by resorting to external 2D pose detectors, to the 3D space. However, this type of approaches discards the contextual information of images which are strong cues for 3D pose estimation. Meanwhile, some other methods predict the joints directly from monocular images but adopt a 2.5D output representation $P^{2.5D} = (u,v,z^{r}) $ where both $u$ and $v$ are in the image space but $z^{r}$ in root-relative 3D space. Thus, the ground-truth information (e.g., the depth of root joint from the camera) is normally utilized to transform the 2.5D output to the 3D space, which limits the applicability in practice. In this work, we propose a novel end-to-end framework that not only exploits the contextual information but also produces the output directly in the 3D space via cascaded dimension-lifting. Specifically, we decompose the task of lifting pose from 2D image space to 3D spatial space into several sequential sub-tasks, 1) kinematic skeletons \& individual joints estimation in 2D space, 2) root-relative depth estimation, and 3) lifting to the 3D space, each of which employs direct supervisions and contextual image features to guide the learning process. Extensive experiments show that the proposed framework achieves state-of-the-art performance on two widely used 3D human pose datasets (Human3.6M, MuPoTS-3D).

In this article, we consider numerical schemes for polynomial diffusions on the unit ball $\mathscr{B}^{d}$, which are solutions of stochastic differential equations with a diffusion coefficient of the form $\sqrt{1-|x|^{2}}$. We introduce a projection scheme on the unit ball $\mathscr{B}^{d}$ based on a backward Euler--Maruyama scheme and provide the $L^{2}$-rate of convergence. The main idea to consider the numerical scheme is the transformation argument introduced by Swart [29] for proving the pathwise uniqueness for some stochastic differential equation with a non-Lipschitz diffusion coefficient.

We propose a novel transformer-based styled handwritten text image generation approach, HWT, that strives to learn both style-content entanglement as well as global and local writing style patterns. The proposed HWT captures the long and short range relationships within the style examples through a self-attention mechanism, thereby encoding both global and local style patterns. Further, the proposed transformer-based HWT comprises an encoder-decoder attention that enables style-content entanglement by gathering the style representation of each query character. To the best of our knowledge, we are the first to introduce a transformer-based generative network for styled handwritten text generation. Our proposed HWT generates realistic styled handwritten text images and significantly outperforms the state-of-the-art demonstrated through extensive qualitative, quantitative and human-based evaluations. The proposed HWT can handle arbitrary length of text and any desired writing style in a few-shot setting. Further, our HWT generalizes well to the challenging scenario where both words and writing style are unseen during training, generating realistic styled handwritten text images.

Recent progress in language modeling has been driven not only by advances in neural architectures, but also through hardware and optimization improvements. In this paper, we revisit the neural probabilistic language model (NPLM) of~\citet{Bengio2003ANP}, which simply concatenates word embeddings within a fixed window and passes the result through a feed-forward network to predict the next word. When scaled up to modern hardware, this model (despite its many limitations) performs much better than expected on word-level language model benchmarks. Our analysis reveals that the NPLM achieves lower perplexity than a baseline Transformer with short input contexts but struggles to handle long-term dependencies. Inspired by this result, we modify the Transformer by replacing its first self-attention layer with the NPLM's local concatenation layer, which results in small but consistent perplexity decreases across three word-level language modeling datasets.

Controlling bias in training datasets is vital for ensuring equal treatment, or parity, between different groups in downstream applications. A naive solution is to transform the data so that it is statistically independent of group membership, but this may throw away too much information when a reasonable compromise between fairness and accuracy is desired. Another common approach is to limit the ability of a particular adversary who seeks to maximize parity. Unfortunately, representations produced by adversarial approaches may still retain biases as their efficacy is tied to the complexity of the adversary used during training. To this end, we theoretically establish that by limiting the mutual information between representations and protected attributes, we can assuredly control the parity of any downstream classifier. We demonstrate an effective method for controlling parity through mutual information based on contrastive information estimators and show that they outperform approaches that rely on variational bounds based on complex generative models. We test our approach on UCI Adult and Heritage Health datasets and demonstrate that our approach provides more informative representations across a range of desired parity thresholds while providing strong theoretical guarantees on the parity of any downstream algorithm.

A motion-blurred image is the temporal average of multiple sharp frames over the exposure time. Recovering these sharp video frames from a single blurred image is nontrivial, due to not only its strong ill-posedness, but also various types of complex motion in reality such as rotation and motion in depth. In this work, we report a generalized video extraction method using the affine motion modeling, enabling to tackle multiple types of complex motion and their mixing. In its workflow, the moving objects are first segemented in the alpha channel. This allows separate recovery of different objects with different motion. Then, we reduce the variable space by modeling each video clip as a series of affine transformations of a reference frame, and introduce the $l0$-norm total variation regularization to attenuate the ringing artifact. The differentiable affine operators are employed to realize gradient-descent optimization of the affine model, which follows a novel coarse-to-fine strategy to further reduce artifacts. As a result, both the affine parameters and sharp reference image are retrieved. They are finally input into stepwise affine transformation to recover the sharp video frames. The stepwise retrieval maintains the nature to bypass the frame order ambiguity. Experiments on both public datasets and real captured data validate the state-of-the-art performance of the reported technique.

This paper aims to study a new stochastic order based upon discrete Laplace transforms. By this order, in a setup where the sample size is random, having discrete delta and nabla distributions, we obtain some ordering results involving ordinary and fractional order statistics. Some applications in frailty models and reliability are presented as well.

Annette Rios,Chantal Amrhein,Noëmi Aepli,Rico Sennrich
from arxiv, To be published in: Proceedings of the 2021 Conference of the North American Chapter of the Association for Computational Linguistics: Human Language Technologies (NAACL-HLT 2021)

Many sequence-to-sequence tasks in natural language processing are roughly monotonic in the alignment between source and target sequence, and previous work has facilitated or enforced learning of monotonic attention behavior via specialized attention functions or pretraining. In this work, we introduce a monotonicity loss function that is compatible with standard attention mechanisms and test it on several sequence-to-sequence tasks: grapheme-to-phoneme conversion, morphological inflection, transliteration, and dialect normalization. Experiments show that we can achieve largely monotonic behavior. Performance is mixed, with larger gains on top of RNN baselines. General monotonicity does not benefit transformer multihead attention, however, we see isolated improvements when only a subset of heads is biased towards monotonic behavior. 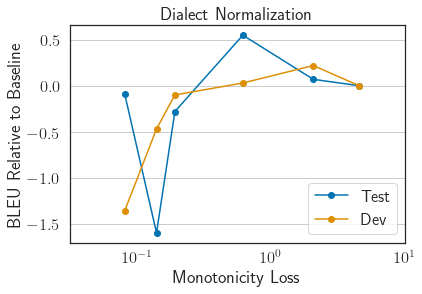 We present a novel quantum fully homomorphic encryption (QFHE) scheme, which allows to perform the conditional rotation with the control bit in encrypted form. In our scheme, any quantum circuit can be directly evaluated with no need to decompose into Clifford/non-Clifford gates, nor be transformed into real representation. Consequently, our QFHE is more convenient than previous QFHE schemes for evaluating general quantum algorithms. The security of our scheme relies on the hardness of the underlying quantum capable FHE scheme, and the latter sets its security on the learning with errors problem and the circular security assumption.

In this paper, we address the problem of makeup transfer, which aims at transplanting the makeup from the reference face to the source face while preserving the identity of the source. Existing makeup transfer methods have made notable progress in generating realistic makeup faces, but do not perform well in terms of color fidelity and spatial transformation. To tackle these issues, we propose a novel Facial Attribute Transformer (FAT) and its variant Spatial FAT for high-quality makeup transfer. Drawing inspirations from the Transformer in NLP, FAT is able to model the semantic correspondences and interactions between the source face and reference face, and then precisely estimate and transfer the facial attributes. To further facilitate shape deformation and transformation of facial parts, we also integrate thin plate splines (TPS) into FAT, thus creating Spatial FAT, which is the first method that can transfer geometric attributes in addition to color and texture. Extensive qualitative and quantitative experiments demonstrate the effectiveness and superiority of our proposed FATs in the following aspects: (1) ensuring high-fidelity color transfer; (2) allowing for geometric transformation of facial parts; (3) handling facial variations (such as poses and shadows) and (4) supporting high-resolution face generation.

We address the problem of analyzing the performance of 3D face alignment (3DFA) algorithms. Traditionally, performance analysis relies on carefully annotated datasets. Here, these annotations correspond to the 3D coordinates of a set of pre-defined facial landmarks. However, this annotation process, be it manual or automatic, is rarely error-free, which strongly biases the analysis. In contrast, we propose a fully unsupervised methodology based on robust statistics and a parametric confidence test. We revisit the problem of robust estimation of the rigid transformation between two point sets and we describe two algorithms, one based on a mixture between a Gaussian and a uniform distribution, and another one based on the generalized Student's t-distribution. We show that these methods are robust to up to 50% outliers, which makes them suitable for mapping a face, from an unknown pose to a frontal pose, in the presence of facial expressions and occlusions. Using these methods in conjunction with large datasets of face images, we build a statistical frontal facial model and an associated parametric confidence metric, eventually used for performance analysis. We empirically show that the proposed pipeline is neither method-biased nor data-biased, and that it can be used to assess both the performance of 3DFA algorithms and the accuracy of annotations of face datasets.

Object detection with transformers (DETR) reaches competitive performance with Faster R-CNN via a transformer encoder-decoder architecture. Inspired by the great success of pre-training transformers in natural language processing, we propose a pretext task named random query patch detection to Unsupervisedly Pre-train DETR (UP-DETR) for object detection. Specifically, we randomly crop patches from the given image and then feed them as queries to the decoder. The model is pre-trained to detect these query patches from the original image. During the pre-training, we address two critical issues: multi-task learning and multi-query localization. (1) To trade off classification and localization preferences in the pretext task, we freeze the CNN backbone and propose a patch feature reconstruction branch which is jointly optimized with patch detection. (2) To perform multi-query localization, we introduce UP-DETR from single-query patch and extend it to multi-query patches with object query shuffle and attention mask. In our experiments, UP-DETR significantly boosts the performance of DETR with faster convergence and higher average precision on object detection, one-shot detection and panoptic segmentation. Code and pre-training models: https://github.com/dddzg/up-detr.