Learning structural representations of node sets from graph-structured data is crucial for applications ranging from node-role discovery to link prediction and molecule classification. Graph Neural Networks (GNNs) have achieved great success in structural representation learning. However, most GNNs are limited by the 1-Weisfeiler-Lehman (WL) test and thus possible to generate identical representation for structures and graphs that are actually different. More powerful GNNs, proposed recently by mimicking higher-order-WL tests, only focus on entire-graph representations and cannot utilize sparsity of the graph structure to be computationally efficient. Here we propose a general class of structure-related features, termed Distance Encoding (DE), to assist GNNs in representing node sets with arbitrary sizes with strictly more expressive power than the 1-WL test. DE essentially captures the distance between the node set whose representation is to be learnt and each node in the graph, which includes important graph-related measures such as shortest-path-distance and generalized PageRank scores. We propose two general frameworks for GNNs to use DEs (1) as extra node attributes and (2) further as controllers of message aggregation in GNNs. Both frameworks may still utilize the sparse structure to keep scalability to process large graphs. In theory, we prove that these two frameworks can distinguish node sets embedded in almost all regular graphs where traditional GNNs always fail. We also rigorously analyze their limitations. Empirically, we evaluate these two frameworks on node structural roles prediction, link prediction and triangle prediction over six real networks. The results show that our models outperform GNNs without DEs by up-to 15% improvement in average accuracy and AUC. Our models also significantly outperform other SOTA baselines particularly designed for those tasks.

Mining graph data has become a popular research topic in computer science and has been widely studied in both academia and industry given the increasing amount of network data in the recent years. However, the huge amount of network data has posed great challenges for efficient analysis. This motivates the advent of graph representation which maps the graph into a low-dimension vector space, keeping original graph structure and supporting graph inference. The investigation on efficient representation of a graph has profound theoretical significance and important realistic meaning, we therefore introduce some basic ideas in graph representation/network embedding as well as some representative models in this chapter.

Incompleteness is a common problem for existing knowledge graphs (KGs), and the completion of KG which aims to predict links between entities is challenging. Most existing KG completion methods only consider the direct relation between nodes and ignore the relation paths which contain useful information for link prediction. Recently, a few methods take relation paths into consideration but pay less attention to the order of relations in paths which is important for reasoning. In addition, these path-based models always ignore nonlinear contributions of path features for link prediction. To solve these problems, we propose a novel KG completion method named OPTransE. Instead of embedding both entities of a relation into the same latent space as in previous methods, we project the head entity and the tail entity of each relation into different spaces to guarantee the order of relations in the path. Meanwhile, we adopt a pooling strategy to extract nonlinear and complex features of different paths to further improve the performance of link prediction. Experimental results on two benchmark datasets show that the proposed model OPTransE performs better than state-of-the-art methods. 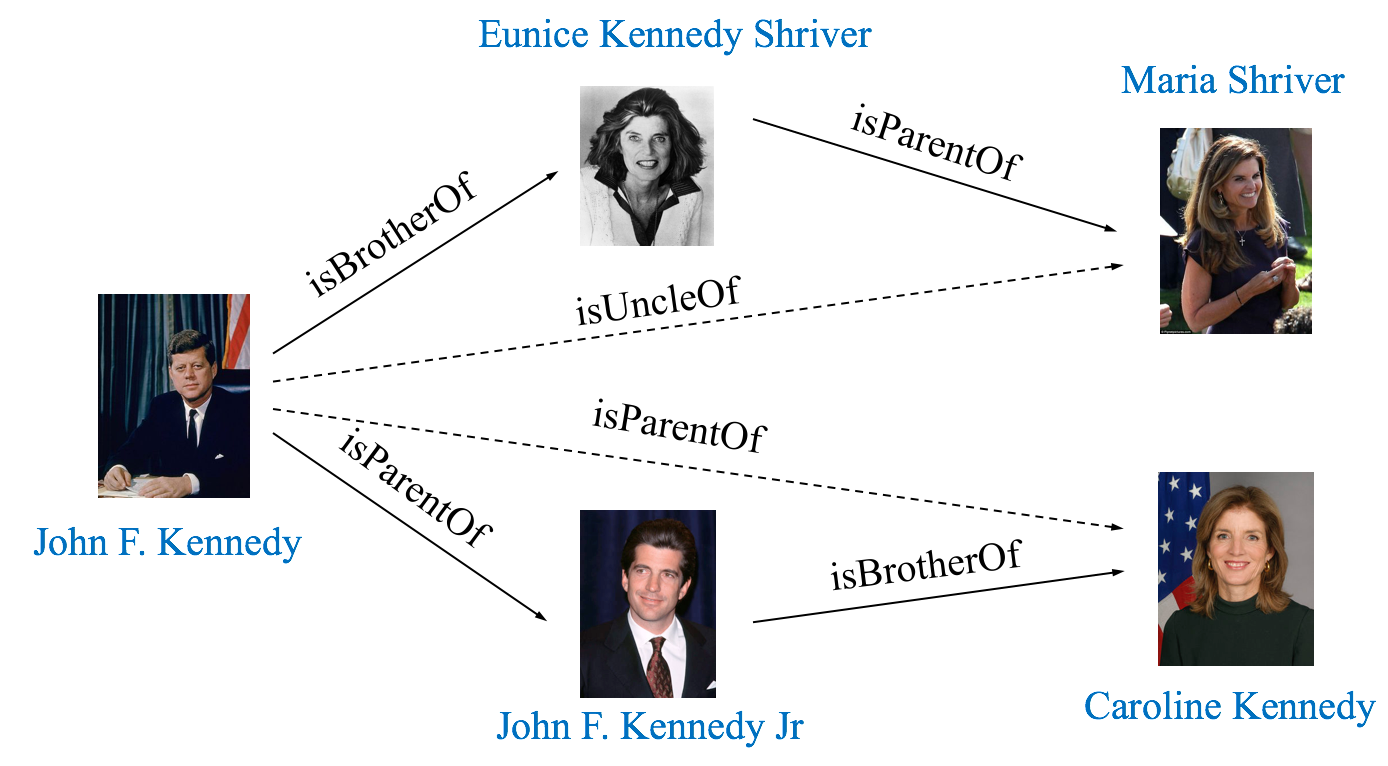 Meta-learning extracts the common knowledge acquired from learning different tasks and uses it for unseen tasks. It demonstrates a clear advantage on tasks that have insufficient training data, e.g., few-shot learning. In most meta-learning methods, tasks are implicitly related via the shared model or optimizer. In this paper, we show that a meta-learner that explicitly relates tasks on a graph describing the relations of their output dimensions (e.g., classes) can significantly improve the performance of few-shot learning. This type of graph is usually free or cheap to obtain but has rarely been explored in previous works. We study the prototype based few-shot classification, in which a prototype is generated for each class, such that the nearest neighbor search between the prototypes produces an accurate classification. We introduce "Gated Propagation Network (GPN)", which learns to propagate messages between prototypes of different classes on the graph, so that learning the prototype of each class benefits from the data of other related classes. In GPN, an attention mechanism is used for the aggregation of messages from neighboring classes, and a gate is deployed to choose between the aggregated messages and the message from the class itself. GPN is trained on a sequence of tasks from many-shot to few-shot generated by subgraph sampling. During training, it is able to reuse and update previously achieved prototypes from the memory in a life-long learning cycle. In experiments, we change the training-test discrepancy and test task generation settings for thorough evaluations. GPN outperforms recent meta-learning methods on two benchmark datasets in all studied cases.

Graph neural networks (GNNs) are a popular class of machine learning models whose major advantage is their ability to incorporate a sparse and discrete dependency structure between data points. Unfortunately, GNNs can only be used when such a graph-structure is available. In practice, however, real-world graphs are often noisy and incomplete or might not be available at all. With this work, we propose to jointly learn the graph structure and the parameters of graph convolutional networks (GCNs) by approximately solving a bilevel program that learns a discrete probability distribution on the edges of the graph. This allows one to apply GCNs not only in scenarios where the given graph is incomplete or corrupted but also in those where a graph is not available. We conduct a series of experiments that analyze the behavior of the proposed method and demonstrate that it outperforms related methods by a significant margin.

Learning a faithful directed acyclic graph (DAG) from samples of a joint distribution is a challenging combinatorial problem, owing to the intractable search space superexponential in the number of graph nodes. A recent breakthrough formulates the problem as a continuous optimization with a structural constraint that ensures acyclicity (Zheng et al., 2018). The authors apply the approach to the linear structural equation model (SEM) and the least-squares loss function that are statistically well justified but nevertheless limited. Motivated by the widespread success of deep learning that is capable of capturing complex nonlinear mappings, in this work we propose a deep generative model and apply a variant of the structural constraint to learn the DAG. At the heart of the generative model is a variational autoencoder parameterized by a novel graph neural network architecture, which we coin DAG-GNN. In addition to the richer capacity, an advantage of the proposed model is that it naturally handles discrete variables as well as vector-valued ones. We demonstrate that on synthetic data sets, the proposed method learns more accurate graphs for nonlinearly generated samples; and on benchmark data sets with discrete variables, the learned graphs are reasonably close to the global optima. The code is available at \url{https://github.com/fishmoon1234/DAG-GNN}.

Low-dimensional embeddings of nodes in large graphs have proved extremely useful in a variety of prediction tasks, from content recommendation to identifying protein functions. However, most existing approaches require that all nodes in the graph are present during training of the embeddings; these previous approaches are inherently transductive and do not naturally generalize to unseen nodes. Here we present GraphSAGE, a general, inductive framework that leverages node feature information (e.g., text attributes) to efficiently generate node embeddings for previously unseen data. Instead of training individual embeddings for each node, we learn a function that generates embeddings by sampling and aggregating features from a node's local neighborhood. Our algorithm outperforms strong baselines on three inductive node-classification benchmarks: we classify the category of unseen nodes in evolving information graphs based on citation and Reddit post data, and we show that our algorithm generalizes to completely unseen graphs using a multi-graph dataset of protein-protein interactions.

Random walks are at the heart of many existing network embedding methods. However, such algorithms have many limitations that arise from the use of random walks, e.g., the features resulting from these methods are unable to transfer to new nodes and graphs as they are tied to vertex identity. In this work, we introduce the Role2Vec framework which uses the flexible notion of attributed random walks, and serves as a basis for generalizing existing methods such as DeepWalk, node2vec, and many others that leverage random walks. Our proposed framework enables these methods to be more widely applicable for both transductive and inductive learning as well as for use on graphs with attributes (if available). This is achieved by learning functions that generalize to new nodes and graphs. We show that our proposed framework is effective with an average AUC improvement of 16:55% while requiring on average 853x less space than existing methods on a variety of graphs.

Recurrent models for sequences have been recently successful at many tasks, especially for language modeling and machine translation. Nevertheless, it remains challenging to extract good representations from these models. For instance, even though language has a clear hierarchical structure going from characters through words to sentences, it is not apparent in current language models. We propose to improve the representation in sequence models by augmenting current approaches with an autoencoder that is forced to compress the sequence through an intermediate discrete latent space. In order to propagate gradients though this discrete representation we introduce an improved semantic hashing technique. We show that this technique performs well on a newly proposed quantitative efficiency measure. We also analyze latent codes produced by the model showing how they correspond to words and phrases. Finally, we present an application of the autoencoder-augmented model to generating diverse translations. 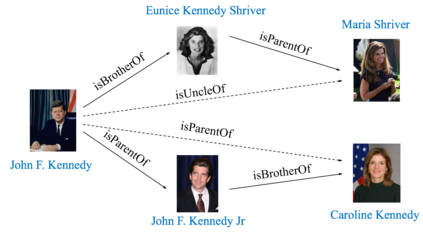 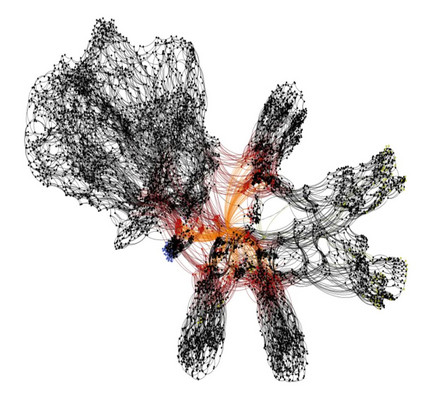